Nociception and pain in fish, a tough question part I

This thursday the Swedish Centre for Animal Welfare (SCAW) at the Swedish University of Agricultural Sciences published a report dealing with wether or not fish can feel pain and if they can suffer. This is getting more and more relevant as more people become aware of what they eat and do not want to cause unnecessary suffering to the animal being put on the dinner table. In a few blog post starting from this i will discuss the different articles cited in this report about fish welfare. Sadly its only available in swedish but if you know swedish heres the link: http://www.slu.se/Documents/externwebben/centrumbildningar-projekt/scaw/Fiskkonferens/Kan-fiskar-kanna-smarta-och-eller-uppleva-lidande.pdf 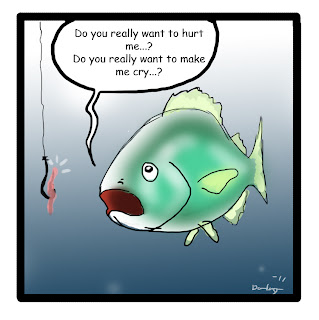 The authors of the report discuss several reviews and articles some of them giving contradictory conclusions in this question. Nociceptors seem to be present in some invertebrates and most if not all vertebrates. They are important instruments in sensing and reacting to various harmful stimuli. Pain on the other hand is the "feeling" we often refer to in our daily life. The feeling of pain is processed in the neocortex in humans. Fish which lacks the layered cortex present in mammals are according to some researchers not able to have the "feeling" of pain. This would mean that they would just react to a painful stimuli and not learn to avoid it since it would be more of a reflex response rather than a response that have been processed in the higher brain centers. Is this the case for fish, do they only react by a reflex to a harmful stimuli or do they process such stimuli in the brain and perceive the feeling of pain?

The authors of the report give several examples of different studies on this and one of them caught my attention. This was a study done by Dunlop & Laming in 2005 showing an activation of several brain areas including telencephalon in both goldfish and rainbow trout as response to given mechanoceptive and nociceptive stimuli. One of the criteria for determining if a animal feel pain is the presence of receptor cells that link to forebrain areas, a criteria which would be fulfilled if their results is correct. To investigate wether or not the nociceptive cells link to forebrain areas of these two species they removed the bone covering the top of the skull on the fish and inserted electrodes in the spinal cord, cerebellum, tectum and telencephalon. Then they gave both mechanoceptive and nociceptive stimuli on the sides of the fish. They recorded responses in all brain areas included to both types of stimuli. In goldfish the nociceptive stimuli yielded a larger response than the mechanoceptive stimuli in the brain while they did not differ in the rainbow trout.

What their study show is that the response to nociceptive stimuli in these fish are not based solely on reflexes alone since the forebrain, not only the spinal cord, is activated upon stimulation. In telencephalon some of the structures suggested to be homologous to hippocampus and amygdala of tetrapod brains are located, which would imply a processing of these stimuli in the brain to in the future avoid these harmful experiences. Other studies have shown that fish seem to remember and do not bite a fishing hook a second time other than if it is food deprived. Then it might be the only way for the fish to find food at the moment and they have to bite the hook a second or third time. Taken together this data would suggest at least that fish are somewhat able to "feel" pain and remember it to avoid being in this situation in the future.

In my next blog post I will continue to discuss fish welfare, and focus a bit of stress and how that affect fish during sport fishing.